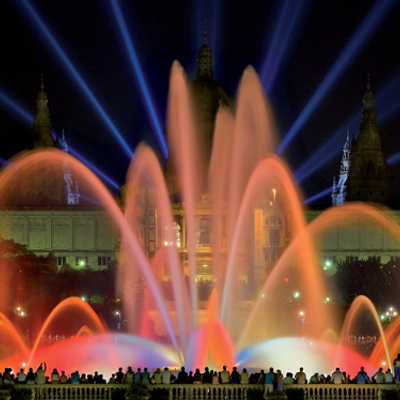 Top 7 things to do in Barcelona

There are many things to do in Barcelona, almost too many if you are not in the city for very long. However, as it always happens, some tourist attractions are more significant than others, and there are few things you just can't miss when visiting the Catalan Capital. Here you have a list with the top 7 places to go in Barcelona by Avenida Palace Hotel.

Even though it is still unfinished, the Sagrada Família is the most visited monument in Barcelona. This temple was designed by Antoni Gaudí (1852 - 1926), a very famous Catalan architect, who has several really impressive buildings around the city that will be also mentioned in this list. The fact that the Sagrada Família is so famous is no surprise at all: the architecture, the iconography, the interior and the light are truly amazing, and you have to see to really appreciate the value of this monument.

Of course, this means the queues to access the church can be really long, especially at summer. We recommend you to buy tickets to the Sagrada Família in advance and choose the one that suits your interests better.

2. The Magic Fountain of Montjuïc

A show of light, music and water. This is the biggest ornamental fountain of the city and it was built for the International Exhibition of 1929. The displays take place in the evenings (you can check the time table on the Council website), so that the sunlight doesn't interfere with the show. The fountain offers a magnificent display of water acrobatics synchronizing with music and light. This is also the spot where the famous “Piromusical” takes place during the festival of “La Mercè”, the patron of Barcelona. 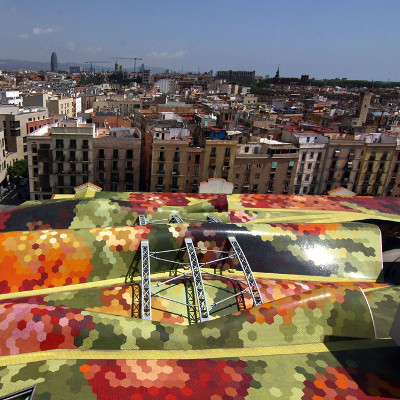 The Modernisme movement (also known as art-nouveau or Tiffany) was very important in Barcelona between the end of the XIX century and the beginning of the XX, and the Park Güell, which began to be built in 1900, is a clear example of this. An association between the entrepreneur Eusebi Güell and the famous architect Antoni Gaudí led to the creation of Park Güell, an attempt to create a housing estate designed like the British residential parks, from the perspective of the Modernisme, of course. However, from the 40 houses planned to be built, only two were completed. Nowadays, this is one of the most iconic places in Barcelona, and it is a must when visiting the city. You can plan your visit to the monumental precinct and buy tickets in advance.

One of the best viewpoints of Barcelona. It is a great stop after going to Park Güell, because it's only a 15-minute walk from there. You can also take the bus number 24 from Plaça Catalunya or the metro to El Carmel if you are in the city center. Make sure to wear comfortable shoes because it is on a hilltop (a small one called Turó de la Rovira). Once you get there, you will be surrounded by old ruins of an anti-aircraft battery from the Spanish Civil War and you will have Barcelona at your feet. If you can, we recommend you to go there in the evening and watch the sunset, it is a truly memorable experience.

You probably won't have the necessity to buy groceries while visiting Barcelona, but we still recommend you to go to the market. At least to these two. La Boqueria is the most popular market in Barcelona and is now a tourist attraction. Its location has probably a lot to do with this, since you will find it in La Rambla. Here, you will be able to have something to eat and enjoy the unique atmosphere of this central market.

If a colored, undulated roof catches your eye, then you are contemplating the Santa Caterina Market, in the Gòtic district. This was the first covered food market in Barcelona, and a refurbishment by Enric Miralles and Benedetta Tagliabue in 2005 gave it this special touch, that attracts a lot of visitors.

As we mentioned earlier, the Modernisme movement was very important in Catalunya, especially Barcelona. This is why you will find many buildings that are worth a visit, and we promise you won't be disappointed.

You can start with Casa Milà, popularly known as La Pedrera, and Casa Batlló. Both buildings are in Passeig the Gràcia, one of the main streets of the city, and both were designed by Antoni Gaudí. La Pedrera was inscribed on UNESCO World Heritage List in 1984.

You can then go to Palau de la Música Catalana, in the Gòtic district. This beautiful building was designed by Lluís Domènech i Montaner who, along with Gaudí, was one of the top architects of the Modernisme movement. The details of the facade and the stained-glass skylight in the concert hall, turn this place into a must-see. The Palau de la Música was declared a UNESCO World Heritage Site along with Hospital de Sant Pau. The Recinte Modernista de Sant Pau was also designed by Lluís Domènech i Montaner and it was conceived as, not only a hospital, but a garden city for the sick. Nowadays, this is Europe's most important art-nouveau complex and it translates into a unique experience for any visitor.

There are many more buildings you can include to this list, but these are the top ones, in case you don't have a lot of time on your hands.

If you are a sports fan, you can't leave Barcelona without visiting the home of Barcelona's football team. Even if there are no games while you are in the city, you can get a full Camp Nou Experience (tour and museum). The Barça museum is one of the most visited museums in Europe and, with this tour, you will be able to discover more about the team and see every corner of the stadium.